Cholecystokinin (CCK), the most abundant brain neuropeptide, is involved in relevant behavioral functions like memory, cognition, and reward through its interactions with the opioid and dopaminergic systems in the limbic system. CCK excites neurons by binding two receptors, CCK1 and CCK2, expressed at low and high levels in the brain, respectively. Historically, CCK2 receptors have been related to the induction of panic attacks in humans. Disturbances in brain CCK expression also underlie the physiopathology of schizophrenia, which is attributed to the modulation by CCK1 receptors of the dopamine flux in the basal striatum. Despite this evidence, neither CCK2 receptor antagonists ameliorate human anxiety nor CCK agonists have consistently shown neuroleptic effects in clinical trials. A neglected aspect of the function of brain CCK is its neuromodulatory role in mental disorders. Interestingly, CCK is expressed in pivotal inhibitory interneurons that sculpt cortical dynamics and the flux of nerve impulses across corticolimbic areas and the excitatory projections to mesolimbic pathways. At the basal striatum, CCK modulates the excitability of glutamate, the release of inhibitory GABA, and the discharge of dopamine. Here we focus on how CCK may reduce rather than trigger anxiety by regulating its cognitive component. Adequate levels of CCK release in the basal striatum may control the interplay between cognition and reward circuitry, which is critical in schizophrenia. Hence, it is proposed that disturbances in the excitatory/ inhibitory interplay modulated by CCK may contribute to the imbalanced interaction between corticolimbic and mesolimbic neural activity found in anxiety and schizophrenia. 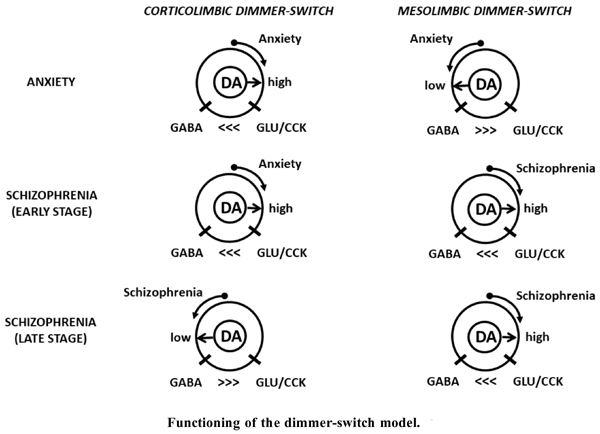