5-HT3 Receptor Antagonism: A Potential Therapeutic Approach for the Treatment of Depression and other Disorders


Background: Depression or Major depressive disorder (MDD) is a prolonged condition of sadness. MDD is the most common mental disorder that affects more than 264 million people worldwide. According to the monoamine hypothesis, serotonin (5-hydroxy tryptamine, 5-HT), dopamine (DA) and norepinephrine (NE) are the major neurotransmitters (NTs) involved in depression.

Methods: The methodology adopted for writing this review article is essentially based on the secondary literature search through a systematic literature review. This review mainly focussed on the role of 5-HT3 receptor antagonists (5-HT3RA) in depression and comorbid disorders like anxiety.

Results: Out of three major NTs mentioned above, serotonin has a predominant role in the pathophysiology of depression. The serotonin type-3 receptors (5-HT3R) are well renowned to be expressed in the central nervous system (CNS) in regions which have significance in the vomiting reflex, perception of pain, the reward system, cognition, depression and anxiety control. 5-HT3R are the receptors of serotonergic family that belong to ligand-gated ion channel. 5-HT3RA inhibit the binding of serotonin to postsynaptic 5-HT3R and increases its availability to other receptors like 5- HT1A, 1B and 1D as well as 5-HT2 receptors and produces anti-depressant-like effect. 5-HT3RA also have an important role in mood and stress disorders. Some of the studies have shown the effectiveness of these agents in stress disorder.

Conclusion: The present article focussed on the role of 5-HT3R and their antagonists in the treatment of depression and anxiety. Further studies are warranted to prove their efficacy with respect to other standard anti-depressants. 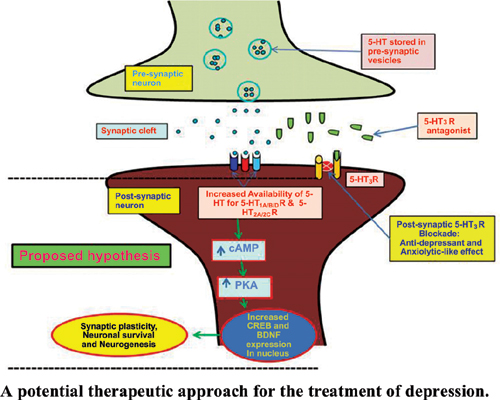