What About Drug Checking? Systematic Review and Netnographic Analysis of Social Media


Drug checking services have been operating worldwide as a harm reduction tool in places like festivals and night clubs. A systematic review and netnographic analysis were conducted to explore the public’s perception of drug checking. Although public perceptions of drug checking had not previously been evaluated in the literature, some positive and negative perceptions were captured. From twitter, a total of 1316 tweets were initially identified. Following the removal of irrelevant tweets, 235 relevant tweets were identified, of which about 95% (n = 223) tweets were in favour, and about 5% (n = 12) were not in favour of drug checking as a harm reduction intervention. Tweets perceived the service as part of effective law reform, public health intervention that serves in raising awareness and countering the role of the internet, initiative to reduce drug related harms and/ or potentially deaths, help in identifying Novel drug trends related to drugs, enabling a scientific basis to capture data, reducing harm from risky drugs or risky consumption, reducing the economic and social burden on society and preventing young people from having criminal records and punitive fines. Drug checking was perceived to support engagement with treatment services and support individuals in making more informed decisions. Tweets against drug checking focussed on the concerns over the quality of drug checking, particularly with false-positive results, which may lead to punitive outcomes, discrimination, and prejudice. The present study showed that twitter can be a useful platform to capture people’s perceptions of drug checking. 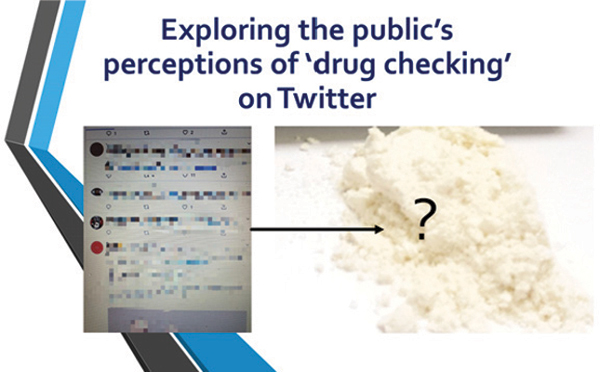