Objectives: The aims of this study were to systematically review the efficacy, acceptability, and tolerability of repetitive transcranial magnetic stimulation (rTMS) combined with antidepressants in the treatment of the first major depressive disorder (MDD) episode.

Materials and Methods: The primary efficacious outcome was the pooled mean-endpoint scores of the Hamilton Depression Rating Scale (HAMD). Rates of response, remission rate, overall discontinuation and discontinuation due to adverse events were also evaluated. Search in the Scopus, PubMed, CINAHL, and Cochrane Controlled Trials Register databases for interesting outcomes was carried out in March 2018.

Results: A total of 108 randomized patients of two randomized controlled trials were included in this study. The pooled mean- endpoint scores of the HAMD in one, two, and four weeks for rTMS plus antidepressants (citalopram or paroxetine) were greater than that of sham plus the antidepressants. The pooled rates of overall discontinuation and discontinuation rates due to adverse events were not different between the two groups.

Conclusion: According to a piece of limited evidence, the high-frequency repetitive transcranial magnetic stimulation (HF-rTMS) could accelerate the antidepressant effect of SSRIs in young patients with a first-episode major depressive disorder. However, the acceptability and tolerability of HF-rTMS in the treatment of such patients are no better than an antidepressant alone. However, further well-defined and large sample-size studies of HF-rTMS combined with an antidepressant in MDD should be carried out to warrant these results. 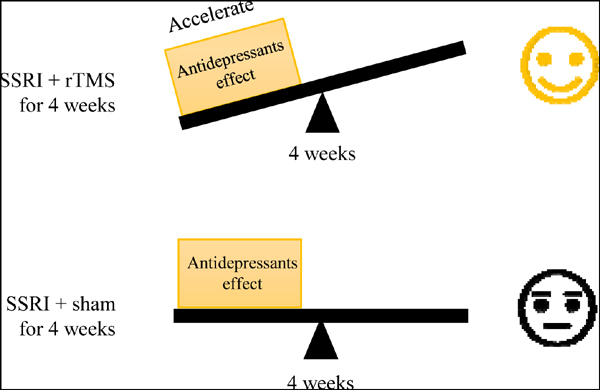