Nightmares and the Cannabinoids


The cannabinoids, Δ9 tetrahydrocannabinol and its analogue, nabilone, have been found to reliably attenuate the intensity and frequency of post-traumatic nightmares. This essay examines how a traumatic event is captured in the mind, after just a single exposure, and repeatedly replicated during the nights that follow. The adaptive neurophysiological, endocrine and inflammatory changes that are triggered by the trauma and that alter personality and behavior are surveyed. These adaptive changes, once established, can be difficult to reverse. But cannabinoids, uniquely, have been shown to interfere with all of these post-traumatic somatic adaptations. While cannabinoids can suppress nightmares and other symptoms of post-traumatic stress disorder, they are not a cure. There may be no cure. The cannabinoids may best be employed, alone, but more likely in conjunction with other agents, in the immediate aftermath of a trauma to mitigate or even abort the metabolic changes which are set in motion by the trauma and which may permanently alter the reactivity of the nervous system. Steps in this direction have already been taken. 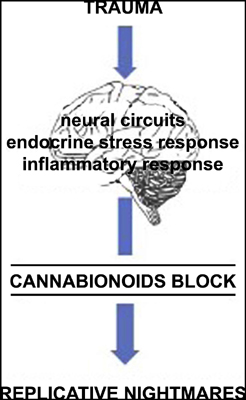