Three inhibitors of type-B monoamine oxidase (MAOB), selegiline, rasagiline, and safinamide, are used for the treatment of Parkinson’s disease (PD). All three drugs improve motor signs of PD, and are effective in reducing motor fluctuations in patients undergoing long-term L-DOPA treatment. The effect of MAOB inhibitors on non-motor symptoms is not uniform and may not be class-related. Selegiline and rasagiline are irreversible inhibitors forming a covalent bond within the active site of MAOB. In contrast, safinamide is a reversible MAOB inhibitor, and also inhibits voltage- sensitive sodium channels and glutamate release. Safinamide is the prototype of a new generation of multi-active MAOB inhibitors, which includes the antiepileptic drug, zonisamide. Inhibition of MAOB-mediated dopamine metabolism largely accounts for the antiparkinsonian effect of the three drugs. Dopamine metabolism by MAOB generates reactive oxygen species, which contribute to nigro-striatal degeneration. Among all antiparkinsonian agents, MAOB inhibitors are those with the greatest neuroprotective potential because of inhibition of dopamine metabolism, induction of neurotrophic factors, and, in the case of safinamide, inhibition of glutamate release. The recent development of new experimental animal models that more closely mimic the progressive neurodegeneration associated with PD will allow to test the hypothesis that MAOB inhibitors may slow the progression of PD. 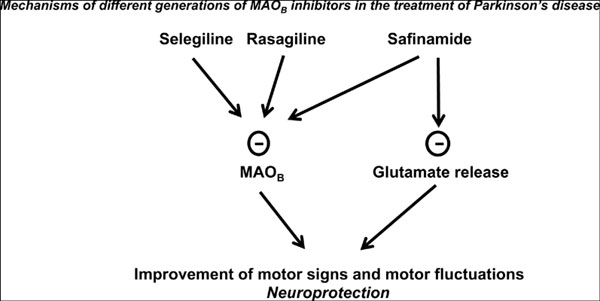