Suicide Risk in Obsessive-Compulsive Disorder and Exploration of Risk Factors: A Systematic Review


Background: Historically, OCD has been considered to be associated with a relatively low risk of suicide. Recent studies, on the contrary, revealed a significant association between OCD and suicide attempts and ideation. A huge variation in prevalence rates, however, is reported.

Objective: To estimate prevalence rates of suicide attempts and suicidal ideation in individuals with OCD, and to identify predictors of suicide risk among subjects with OCD.

Methods: We systematically reviewed the literature on suicide risk (ideation and/or attempts) and OCD. We included studies with appropriate definition of OCD, cross-sectional or prospective design, separating clinical samples from epidemiological studies, that employed a quantitative measure of suicidality and/or reported an outcome measure of the association between suicidality and OCD or examined factors associated with suicidality.

Results: In clinical samples, the mean rate of lifetime suicide attempts is 14.2% (31 studies: range 6- 51.7%). Suicidal ideation is referred by 26.3-73.5% of individuals (17 studies, mean 44.1%); current suicidal ideation rate ranges between 6.4 and 75% (13 studies, mean 25.9). Epidemiological studies found that OCD increases significantly the odds of having a lifetime suicidal ideation as compared to the general population (OR: 1.9-10.3) and a history of lifetime suicide attempts (OR: 1.6- 9.9). Predictors of greater suicide risk are severity of OCD, the symptom dimension of unacceptable thoughts, comorbid Axis I disorders, severity of comorbid depressive and anxiety symptoms, past history of suicidality and some emotion-cognitive factors such as alexithymia and hopelessness. 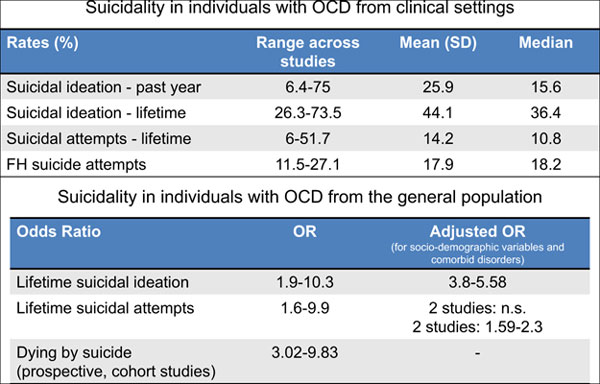