The Role of Sigma-1 Receptor, an Intracellular Chaperone in Neurodegenerative Diseases


Background: Widespread protein aggregation occurs in the living system under stress or during aging, owing to disturbance of endoplasmic reticulum (ER) proteostasis. Many neurodegenerative diseases may have a common mechanism: the failure of protein homeostasis. Perturbation of ER results in unfolded protein response (UPR). Prolonged chronical UPR may activate apoptotic pathways and cause cell death.

Results: ER is associated to mitochondria by the mitochondria-associated ER-membrane, MAM. The sigma-1 receptor (Sig-1R), a well-known ER-chaperone localizes in the MAM. It serves for Ca2+-signaling between the ER and mitochondria, involved in ion channel activities and especially important during neuronal differentiation. Sig-1R acts as central modulator in inter-organelle signaling. Sig-1R helps cell survival by attenuating ER-stress. According to sequence based predictions Sig-1R is a 223 amino acid protein with two transmembrane (2TM) domains. The X-ray structure of the Sig-1R [1] showed a membrane-bound trimeric assembly with one transmembrane (1TM) region. Despite the in vitro determined assembly, the results of in vivo studies are rather consistent with the 2TM structure. The receptor has unique and versatile pharmacological profile. Dimethyl tryptamine (DMT) and neuroactive steroids are endogenous ligands that activate Sig-1R. The receptor has a plethora of interacting client proteins. Sig-1R exists in oligomeric structures (dimer-trimer-octamer-multimer) and this fact may explain interaction with diverse proteins.

Conclusion: Sig-1R agonists have been used in the treatment of different neurodegenerative diseases, e.g. Alzheimer's and Parkinson's diseases (AD and PD) and amyotrophic lateral sclerosis. Utilization of Sig-1R agents early in AD and similar other diseases has remained an overlooked therapeutic opportunity. 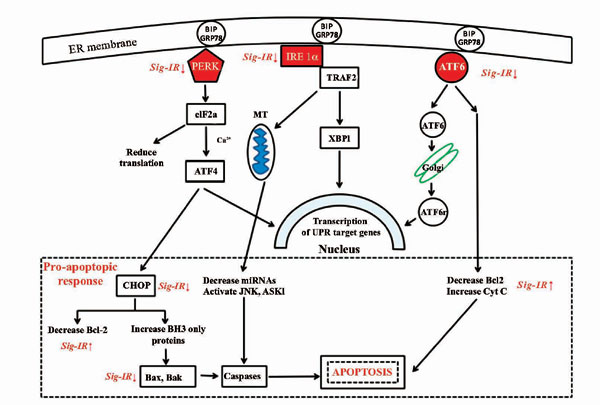