Background: Chronic pain is a significant clinical problem and a very complex pathophysiological phenomenon. There is growing evidence that targeting the endocannabinoid system may be a useful approach to pain alleviation. Classically, the system includes G protein-coupled receptors of the CB1 and CB2 subtypes and their endogenous ligands. More recently, several subtypes of the large superfamily of cation TRP channels have been coined as "ionotropic cannabinoid receptors", thus highlighting their role in cannabinoid signalling. Thus, the aim of this review was to explore the intimate connection between several “painful” TRP channels, endocannabinoids and nociceptive signalling.

Methods: Research literature on this topic was critically reviewed allowing us not only summarize the existing evidence in this area of research, but also propose several possible cellular mechanisms linking nociceptive and cannabinoid signaling with TRP channels.

Conclusion: There is increasing evidence implicating several TRP subtypes not only as an integral part of the endocannabinoid system, but also as promising molecular targets for pain alleviation with the use of endo- and phytocannabinoids, especially when the function of these channels is upregulated under inflammatory conditions. 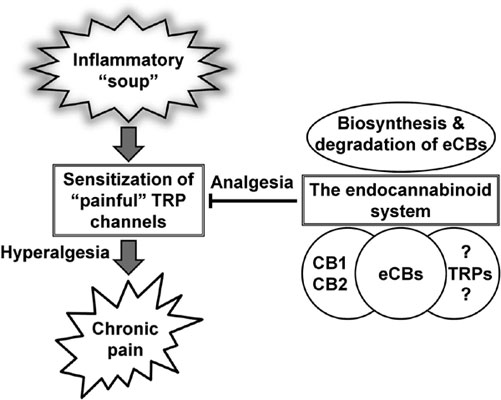